The Greatest Rebound – The Incredible Story of my friend Mike Sweetney: #FindingPurpose #BeingHappy #MentalHealth #NBA
For much of society, fame is glorified above most everything else. Log onto Instagram or any other social media platform and this truth will quickly become apparent. Mike Sweetney, a friend of mine since our high school basketball days, achieved the type of fame that others merely dream about.
Mike was an outstanding high school basketball player and went on to become a star at Georgetown University. His play was so impressive that he was compared to NBA legends. His dream of playing in the NBA came true when he was selected by the Knicks as the 9th pick of the 2003 draft, which also featured Lebron James and Dwayne Wade.

Mike had reached his NBA dream but he wasn’t happy. Just before training camp his world was rocked when he learned his father had passed away. Then his coaches limited his playing time leaving him angry and frustrated. Looking for comfort and relief from the flood of difficult emotions pounding at him, he turned to food and quickly began gaining weight.
It was here, at the pinnacle of the basketball world, that Mike reached rock bottom. He became severely depressed to the point where he attempted suicide. He almost lost his home and family, and he became a joke in the mainstream media. He was ridiculed as the guy who “ate his way” out of the NBA. His NBA career came crashing down.
Publicly falling from super stardom, contending with mental illness, and fighting tooth and nail for his life and his family seemed like too much to overcome. But one day, during an interview with a sports reporter from a major newspaper who wanted to know “what happened to him,” Mike decided he was tired of covering up his struggles and glossing over the battles he was fighting.

He spoke up about his mental health and said how it was with brutal honesty. When the interview was published, Mike was shocked by the response. People he knew along with total strangers reached out and thanked him for opening up and candidly sharing his struggle with his mental health, telling him that they felt less alone and more encouraged. The positive response inspired Mike to continue talking.

Soon, Mike was being asked to speak at schools and community centers to both kids and adults. He began running basketball clinics to empower kids dealing with all types of challenges. Sharing his story inspired other athletes to open up and speak about their own struggles.

Mike found that as he helped others he was starting to feel better himself. Clawing his way towards recovery and bouncing back from rock bottom did not have the fairytale charm that defined his rise to NBA stardom. On the contrary, it was dark, gritty, and sometimes ugly. But, it is this chapter of his life of which he is most proud, and which he has dubbed his “greatest rebound.” Today, Mike can be found traveling the country, inspiring people from all walks of life. 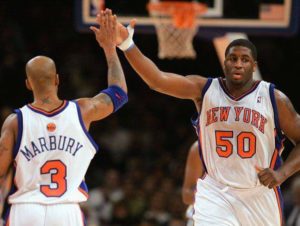