I was feeling so conflicted yesterday. Just as my son, who loves basketball more than anything, was about to get on the bus for an away game, I received two messages from two different teachers that he had acted up in class. First thought in my mind was, “No way he is going to the game today.” When I was younger it was simple: If you didn’t do well in school then you were not allowed to go to practice or a game. No exceptions.

However, I gathered the courage to zoom out and thought to myself that for my son, basketball is his confidence builder in life, it’s where he shines. I didn’t say anything and let him go to the game. Later that evening when I picked him up from the bus he was the first kid off the bus and he had a huge smile on his face. He was so excited to tell me that he had hit the game winning shot. His inner happiness and pride were exploding outward. We held hands and walked home where he ate his favorite meal that I had prepared for him, a burger and fries, and then he went to sleep.

This morning when he woke up he was still feeling very happy and proud. I walked him to school. Just as he was about to walk through the gate, I held him and looked into his eyes. I said, “I want you to remember this forever. Players who make game winning shots do not act up in school.” He looked at me and said, “Ok, Abba. I love you,” and walked into school.

I’m pretty sure that if I would have just yelled at him about his misbehavior and prohibited from going to the game, the lesson would have lasted for only a couple minutes. However, after I left him at the gate this morning, I felt confident that he understood deeply that I was trying to educate him for his own best interest. He understood I only had his best interest in mind, and because he was at a level of consciousness where he was feeling good about himself, he was receptive to what I was saying.

As a parent, I want to teach him to make healthy and empowering changes and decisions when he is feeling good about himself, not when he is feeling down and out (which is not a true representation of our inner potential). Every child is different and every situation is different, of course, but I find that it is helpful to remember (especially when we or our child are struggling or feeling down and out) that there is always a part of us (and our children) that is pure, good, great, empowered and inspired and we should try to make decisions from that part of our soul, and also relate to and talk to that part of others’ souls.

I spoke to my son’s pure, untainted self from that same enlightened part of my own being, and the message was well received. I don’t think I will be hearing anything negative from his teachers today.

In that way, we and the people we interact with and care about will be able to live happier lives, be more resilient, and hit those game winning shots in life. Blessings to all. 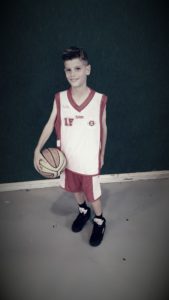