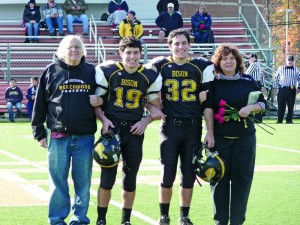 The Sobel twins played their last home game of the year on senior day in front of their parents. From left, Allyn, Ari, Howard, and Leslie Sobel.

Beachwood High School head football coach Ryan Williams didn’t think much of seniors Howard and Ari Sobel when the twins showed up for practice as freshman in 2008.

“My first impression was, ‘Here come two fairly small kids who like to talk a lot who had never played football before,'” Williams said, laughing.

“The more players, the merrier,” said Williams, who brought the Sobels on to help fill a depleted roster. “After their sophomore season, in that offseason, they both started really working out hard and preparing for football. Going into their junior year, we had no idea that they were going to be as good as they were.”

Howard started at fullback as a junior and played fullback and inside linebacker as a senior. He had 14 hurries and 57 tackles, including 13 solos, and 3.5 sacks.

He also paved the way for his brother’s two consecutive 1,000-yard rushing seasons as a blocker.

“It’s great having the Sobels in the backfield,” Howard said. “And it’s great having my brother behind me. I know if he gets tackled, I’m not doing as much as I could have.”

Ari said he wouldn’t want anyone else to block for him.

“I just know that he doesn’t want me to get killed. He’s going to take a shot for me,” Ari said. “We’re best friends; we have an amazing connection.”

Members of Congregation Shaarey Tikvah in Beachwood, the brothers admitted it was difficult practicing Judaism during the season.

“I consider myself a pretty religious person; I observe kashrut,” Howard said. “Our freshman year, we actually missed one of our two-a-days because we went to temple. But as we were getting more involved with the team, we couldn’t really miss those practices … It’s hard participating in a sport while being observant, but aside from that, Judaism is really important to me.”

Ari said, “I’d always pray before games. But a lot of our games were on Saturdays, so I didn’t get to go to synagogue as much as I wanted to. I think it’s cool I got to succeed as a Jewish athlete. It’s like you’re always the underdog.”

Ari said Clevelander Tamir Goodman, a former Israeli basketball star, was a huge motivating factor in his efforts to maintain his Judaism. He said Goodman inspired him when he came to speak at Beachwood’s Israeli Culture Club during his sophomore year.

“He talked about his story,” Ari said. “It’s really inspiring because he gave up almost everything he had for Judaism. He was playing at (the University of) Maryland, and they couldn’t schedule the games (around his observance of Shabbat). So he dropped that all. He had a chance to play in the NBA, and he gave that all up.

“That makes me connect to Judaism a lot more,” Ari said. “It’s so powerful that it made this guy give up a possible NBA career for Judaism. It’s just really inspirational.”